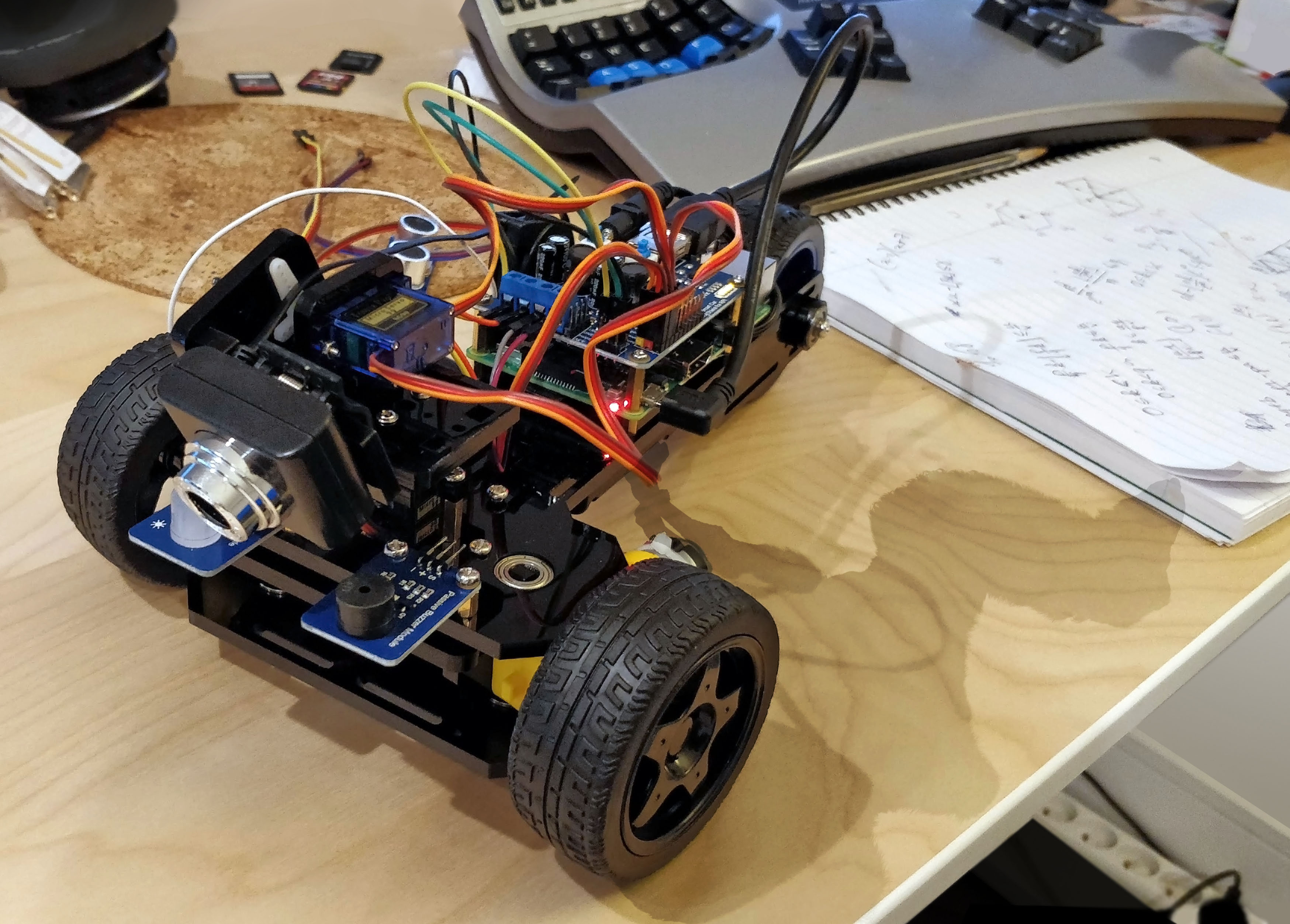 Back when the Raspberry Pi was first released in 2012 Michael Bacarella wrote a blog post on using OCaml and Async on this little device. Since then installing OCaml via opam has become a pretty smooth experience and everything works out of the box when using Raspbian – the default Raspberry Pi distribution.

Raspberry Pis are commonly used to teach programming as students get an immediate feeling of how their projects work in the ‘real world’. There are many resources for learning Python on the Raspberry Pi, but we were wondering if we could also use this single-board computer to help students learn OCaml and the common paradigms that we use here at Jane Street (such as Async for concurrent programming). A fun way to do this is to use a Raspberry Pi to drive a small autonomous robot car using OCaml to write the driving logic. We tried this with two different robot car kits:

Separately, we got a Raspberry Pi 3B+ as in both cases the robots came as a kit that that did not include batteries or a Raspberry Pi and the 4B version was not yet available at this point. Both kits include a camera and an ultrasonic sensor to measure the distance to obstacles. Some Python code is provided to illustrate how to interact with the different sensors, run the motors and servos, and use some additional features like LEDs or Buzzer modules. This code can be found on GitHub in the Adeept repo and in the Freenove repo.

The main difference between the two kits is that for the F3W, the two front wheeled are motorized and a servo is used to change their direction. For the A4W all four wheels are motorized and their directions cannot be changed so turning is done ‘in-place’ by rotating the wheels faster on one side of the robot and slower (or backwards) on the other side.

After a couple hours we were done with building the robots and could start playing with the Python examples. Everything worked smoothly and we moved to the next step: replacing Python with OCaml. Installing the compiler and libraries such as Base or Async via opam was a breeze but we still had to get the OCaml code to interface with the Raspberry Pi GPIO (General-Purpose Input/Output) and to write easy to use APIs for the two robots.

The F3W robot we built can be seen in the image at the top of this post. It includes a camera, some ultra-sonic sensors to measure the distance to the nearest obstacle, a RGB led, and a buzzer. There are two motors connected to each front wheel, a servo to control the robot direction, and another servo to control the direction of the ultrasonic sensor and/or camera.

The provided Python examples use SMBus through the I2C/dev interface so we wrote some small OCaml bindings to be able to open I2C devices and read/write data. The code for this can be found in the ocaml-smbus repo on GitHub.

The I2C operations got abstracted in the Bus module with a simple interface and on top of this we wrote our robot API. This API looks as follows:

The create function can be used to connect to the relevant I2C device. With the returned value, one can:

Here is a simple program that makes the RGB LED blink in different colors.

As our ultrasonic sensor orientation can be changed via a servo, we thought that it would be nice to have it run like a rotating radar: the angle of the sensor is constantly adjusted so that we have recent reads for the obstacle distance in front of us, as well as on the left and right sides. The difficulty is that we would also like to run our driving algorithm concurrently, and adjust the robot direction and speed based on recently measured distances. In order to achieve this being able to run multiple threads would be helpful. As the Raspberry Pi has more horsepower than typical embedded systems we used Async to handle concurrency. Here is a sketch of how we wrapped the ultrasonic sensor thread in its own module. The full code can be seen here.

The Sonic_scan.create function is used to create and start the module. It is given the list of angles at which to monitor the distance as well as some target refresh rate. The Sonic_scan.distances function returns the last measured distances. Most of the Async interaction is abstracted so that the module user does not have to know about the implementation details.

The driving logic can then use this module to adjust the direction and speed of the car over time:

Using this very naive logic we got our car to run through a corridor and avoid the walls (most of the time). This logic can certainly be improved upon to be made more robust, e.g. using a PID controller.

The A4W robot is smaller than the F3W. It is also easier to control as the direction is fixed. The four motors can be controlled independently and the ultrasonic sensor also has a fixed orientation looking straight ahead.

The Python examples for the A4W use the PyPI RPi.GPIO package. The underlying C API works by mem-mapping the /dev/gpiomem device and directly reading from or writing to it. Once again we wrote some OCaml wrappers around these low-level features, the related code can be found in the ocaml-rpi-gpio github repo.

The resulting API ends up being fairly simple and uses phantom types for improved type safety.

The robot API then consists of two modules. The Ultrasonic module handles measuring the distance to the closest obstacle. Here the OCaml code measures the elapsed time between when sending the ultrasound waves and receiving it back and assumes a speed of sound of 340 meters per seconds to return a distance in meters. The Motors module makes it easy to set the motors to run at some given speed, speed_left is for left-hand side motors and speed_right for right-hand side motors.

The full code for this can be found in awr.ml.

A very simple example use of these modules consist in getting the robot to move forward as long as the closest obstacle is at least 60cm away. When an obstacle is detected closer than this threshold, the robot turns right until there is no obstacle.

Once again this navigation algorithm is very basic but already gets the robot running around and avoiding obstacles.

Using OCaml on these Raspberry Pi robots was a very interesting experience, allowing us to learn about the low-level bits of how GPIO works as well as other kernel subsystems. We also hope that this can be leveraged in new fun ways to learn OCaml.

There are several things that we would like to explore next: