Putting the I back in IDE: Towards a Github Explorer 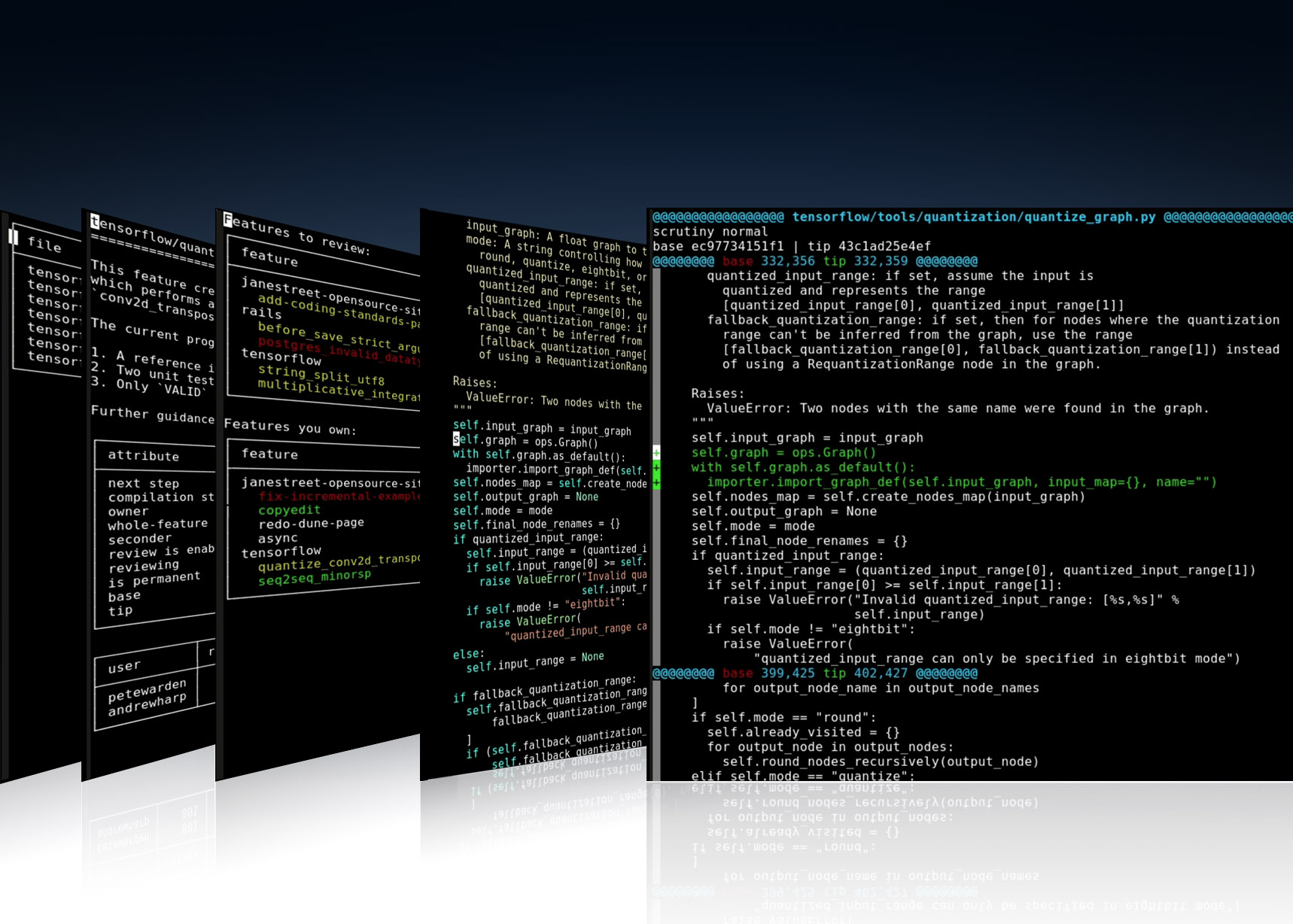 Imagine a system for editing and reviewing code where:

We’ve actually developed this workflow at Jane Street, and it’s been used daily by hundreds of engineers for about two years now. It feels like what an integrated development environment is supposed to feel like. Making software today is as much about collaboration as it is about writing your own code. But most developers are forced to switch from their editor to a web browser to read someone else’s code, and switch back if they want to play with it themselves.

Code review that takes place in a browser isn’t just more inconvenient, it’s often shallower, too: to really understand a piece of code you have to build it, run it, and explore it with your own hands, in your own editor. The system we’ve built at Jane Street is designed to make that level of engagement seamless.

The trouble is that it’s pretty coupled to our somewhat uncommon toolchain: we use Mercurial for revision control; instead of submitting pull requests to Github, we submit “features” to Iron, a code review system that we wrote in OCaml; and to tie it all together, we use a UI called “Feature Explorer” that we built on top of Emacs.

The goal of this post, then, is just to show off what the result looks like – to show you what kind of workflow is possible – in the hope that it inspires similar tools in other ecosystems. The truth is that after writing code at work this way for a while, you start to wish that you had something similar at home. But there’s nothing quite like it for Git and Github and editors like Vim or Textmate or VS Code.

When you walk around the office here, there’s one window you’ll see open on every developer’s screen: 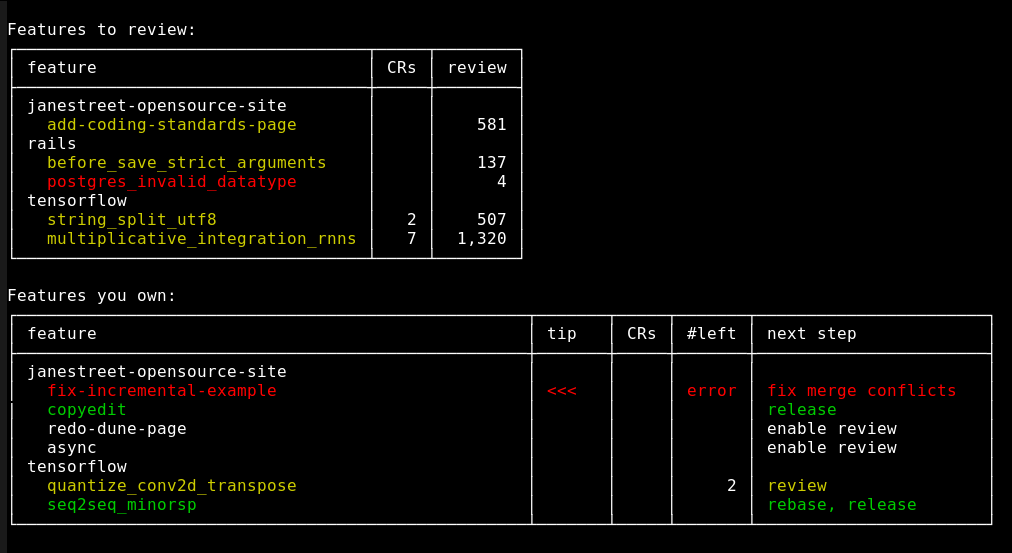 It looks pretty dull but even here there’s actually a lot of power. Notice how some of the features are indented a bit? That’s because they belong to different repositories. To create a new repo, or a new branch within an existing repo, you need only move your cursor to the appropriate line and hit !c. Navigating across repos is as cheap as navigating across branches.

When you drill down into a feature, you see a page just like the one you see on Github for a pull request: 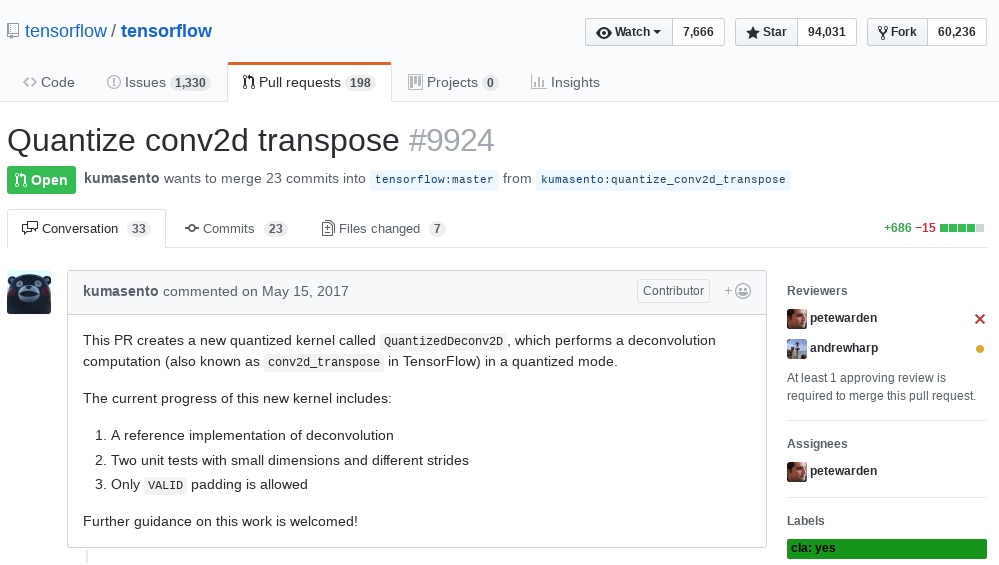 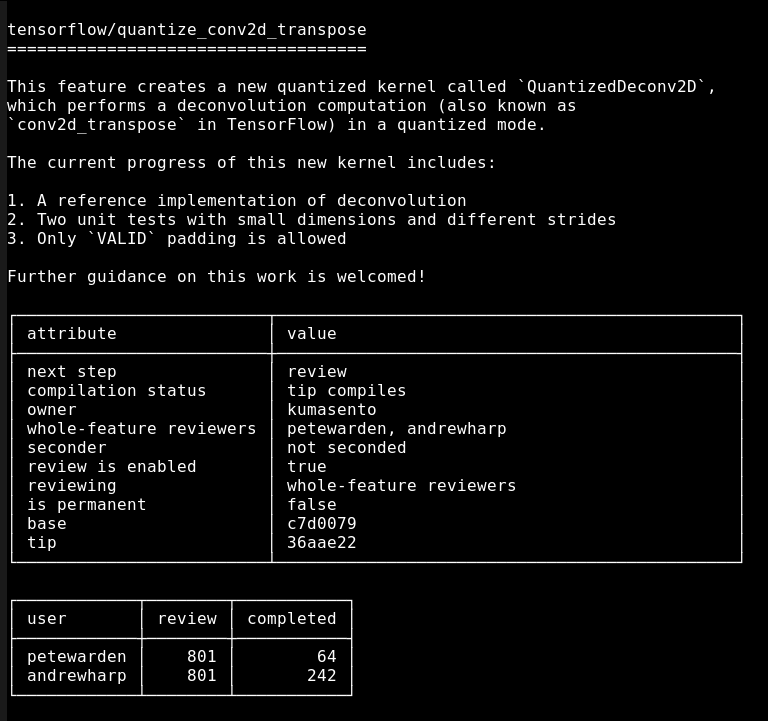 (What a Github pull request would look like if it were a Feature Explorer feature.)

Of course the difference is that here, that “page” is just a buffer in your editor. Which means you can hit Enter and, instead of getting a list of inert diffs in your web browser, you get diffs that can take you, in a single keystroke, to the very lines that were changed – loaded right there in your editor.

What’s more, the file you’re looking at isn’t some global copy – it’s the file for that branch. You didn’t have to think about it but you are already in the feature’s sandbox. Any changes you make are relative to that feature’s tip revision, and won’t affect any other features.

It’s worth dwelling on that for a second. All you did was hit Enter a few times, but it’s as if you performed four steps at radically different levels, all at once:

These levels are blended so seamlessly that the distinctions between them fall away. When you navigate from feature to feature, you don’t have to worry about where you are in your file system, or what revision you’re on. All you’re thinking about is the code you’re looking at. You get used to thinking of the world not in terms of repositories and branches and directories, but in terms of features, i.e., units of functionality.

This makes it almost trivial to switch contexts. Let’s say I want to bring up a coworker’s pull request on a completely different repo. I split my Emacs window, navigate to the global todo, cursor over to her feature, Enter, Enter, and now I’ve got a diff, or the underlying file itself, loaded in my buffer. I can make changes to the file and push them, I can run the build against my coworker’s changes, etc., all without affecting anything about my feature; everything I touch is sandboxed to the world of her pull request. When I’m done, I close the window and get back to what I was doing. I literally never had to leave my editor.

You might think, hey, Atom has a slick new Github integration! Isn’t that the same thing?

Atom’s Github integration, as much an improvement as it is, is not a whole lot more than a browser window that happens to be inside your editor. Navigating to a pull request inside of the Github window doesn’t change “where you are” on disk; you can’t just navigate from repo to repo and, right there in your editor, pull up a file in the exact state it’s in in that pull request.

Once you can do that, you’ll wish the functionality existed everywhere people write code.

The lifecycle of a pull request in Feature Explorer

Let’s go back to the main todo and create a new feature. This is like creating a new branch in git and a pull request in Github at the same time. Just hit !c and give the feature a name, specifying which repo it’s a part of.

When you hit Enter, already Iron has created a “workspace” for the new feature. Under the hood, workspaces are managed using a Mercurial extension called ShareExtension; the git equivalent would be to have multiple clones of the same repo on the same disk.

Since each workspace is a literal directory on disk, just by cd‘ing you can go from one to the other and get a totally independent workspace where you can create files, run the build, and so on.

Back in the main todo, you’ll see the feature you just created in the list of features you own.

There’s a “next step” column because a feature can be in a bunch of different states:

Features that are red have a failing build, the yellow ones are under review, the green ones are ready to release, and the white ones are works in progress.

To add files to your newly created pull request, just nav to its main page and use your editor’s keybindings to create a new file.

When you do that, you’ll notice that your root directory has changed to ~/workspaces/REPO/BRANCH/+share+/ because you’re in the sandbox.

To “submit a pull request,” you need only “enable review,” i.e., hit !e on the feature’s main page – suddenly, the feature will be publicly visible and will show up in other people’s todos. What’s neat about this workflow is that it’s just as easy to disable review, say if someone’s comments in code review led to a major rethink of how to approach the feature. You can go quiet, hack hack hack, and re-enable once you’re ready to show your code to the world again.

We put code review at the top of your todo and color it yellow as a bit of a nudge. The idea is that someone else’s code that’s almost fully baked and almost ready to be released is basically a hair-on-fire priority compared to code that you’ve just started writing. It’s worth interrupting you for.

But we want to get you in and out of code review as quickly as possible. Here’s how it works. In Feature Explorer, doing review is a matter of going to the global todo, hitting Enter on one of the features assigned to you, and pressing r. That’ll bring up a screen like this: 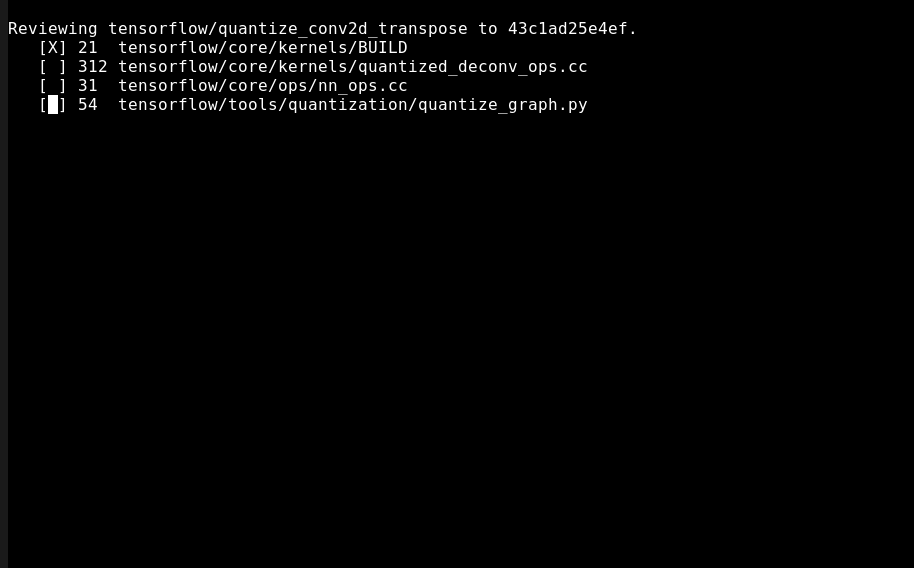 Each of those lines represents a patch for your review. Hit Enter again to read it: 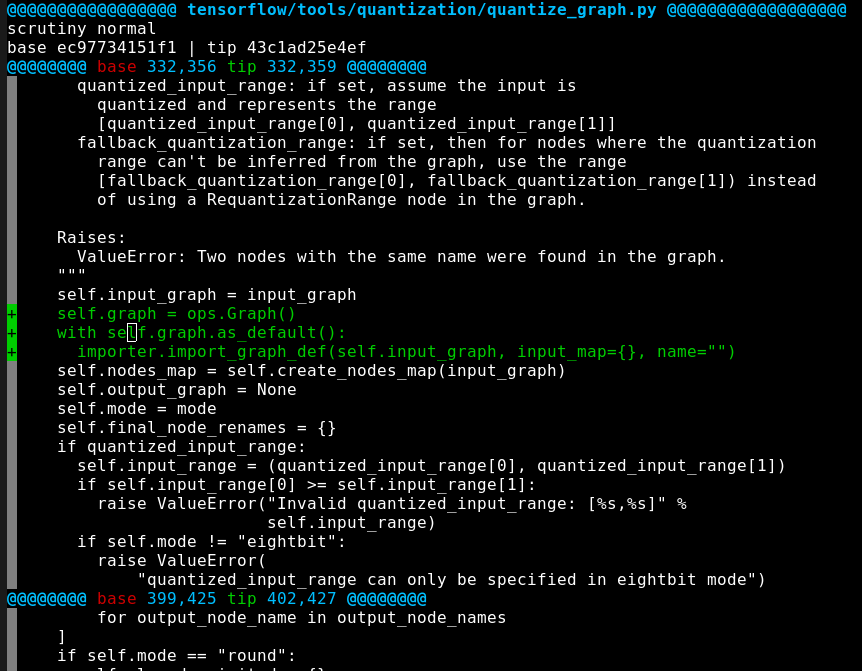 There’s actually a lot of intelligence behind these screens – our code review system, Iron, uses a sophisticated algebra to calculate which diffs to show a reviewer based on what they’ve already reviewed, what merges and rebases there’ve been in the meantime, and the like – but the point to emphasize here is just that it’s all right there in your editor.

If you like what you see in a given patch, just hit !r to approve it. If you don’t understand it, or want to leave a comment, you can open the file by pressing e. The file will be opened in your editor in a feature-specific sandbox. Feature Explorer will even put your cursor on exactly the line affected by the patch.

At Jane Street, reviewers leave notes as literal comments in the code. They’re distinguished by the special designation “CR” at the beginning of the comment. You can assign CRs, resolve them, etc., all just by editing the comment’s text using a special (but simple) syntax.

This system might seem primitive compared to Github’s in-browser commenting UI, but it means that you can do code review entirely within your editor. And since Feature Explorer is so tightly integrated with the code review system, it’s trivial to bring other people into the mix: if you assign someone a CR, the feature it’s a part of will immediately show up in their todo.

There’s nothing special about Mercurial, Iron, or even Emacs that makes this system possible. Any extensible editor – like Vim, Atom, VS Code, Textmate – could support the core UI. Deep integrations for git already exist in most of these editors, and the Github API should be powerful enough to support an Iron-like code review system.

The highest-impact parts are in some ways the simplest, for example, the part that lets you navigate from a Github pull request down to a file in a specific branch on your local disk. If you’ve already got a clone of a repo, branching is cheap; creating sandboxed directories is cheap; and with a good enough Internet connection, listing pull requests and the files they affect is cheap. (One of the things we found with our system is that it didn’t really click until we had a sub-100ms code review server.) The rest is mostly editor glue.

Our system works well for us, but as sometimes happens with a piece of proprietary software built over a long time, it really only works for us. One hopes the idea is intriguing enough to encourage development elsewhere.