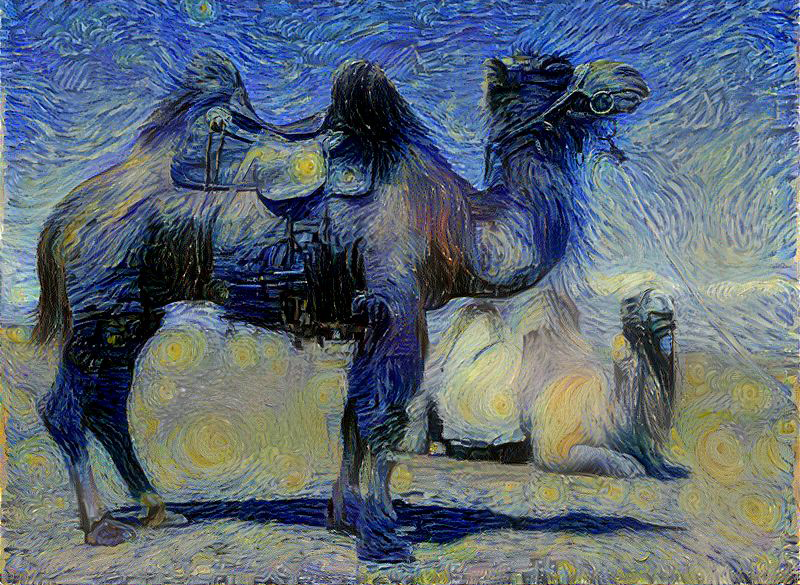 Last year we held a machine learning seminar in our London office, which was an opportunity to reproduce some classical deep learning results with a nice twist: we used OCaml as a programming language rather than Python. This allowed us to train models defined in a functional way in OCaml on a GPU using TensorFlow.

Specifically we looked at a computer vision application, Neural Style Transfer, and at character-level language modeling.

TensorFlow is a numerical library using data flow graphs. It was originally developed by Google and was open-sourced at the end of 2015. Using it, one can easily specify a computation graph and execute it in an optimized way on multiple CPUs or GPUs. A typical use case is neural networks, which are easily represented as computation graphs. TensorFlow can then compute some symbolic gradients for the graphs which makes it easy to minimize some loss functions.

Some TensorFlow OCaml bindings make it possible to use TensorFlow from OCaml programs. These bindings also provide an API that makes it easy to describe complex neural network architecture in a functional way.

To illustrate this here is a simple implementation of VGG-19, a classical Convolutional Neural Network (CNN) architecture from 2014.

As an example of Recurrent Neural Network (RNN) a Long Short-Term Memory (LSTM) unit is also pretty easy to define.

Adding some Type Safety to TensorFlow

On the OCaml side a node of the TensorFlow computation graph has a type 'a Node.t where 'a represents the kind of value that the node contains encoded as a polymorphic variant. For example a node could have type [`float] Node.t if the associated value is a tensor of single precision floating point values.

The OCaml code wrapping TensorFlow operations can then specify the kind of nodes that are used and returned depending on the operation. For example the square root function has the following signature:

This signature specifies that sqrt takes as input a single node containing single or double precision floats. The resulting node contains values of the same kind. Another example could be the greaterEqual comparison operator which signature is:

This specifies that greaterEqual takes as input two nodes. These nodes have to contain the same kind of values, and this kind can be single or double precision floats or 32/64 bits integers. This operation then returns a tensor of boolean values.

So thanks to these signatures sqrt (greaterEqual n1 n2) would raise a compile time error as the input of sqrt contains boolean values.

Specifying these function signatures manually would be tedious so this wrapping OCaml code ends up being generated automatically from the operation description file provided in the TensorFlow distribution.

The Node.t type does not encode the dimensions or even the shape of the embedded tensor. Including some shape information could probably be useful but would result in more complex function signatures.

Neural Style Transfer was originally introduced by Gatis, Ecker, and Bethge in 2015 in A Neural Algorithm of Artistic Style. This paper describes how to combine a content image and a style image to generate a new image.

In order to experiment with this we used a pre-trained VGG-19 model. The actual implementation and details on how to run it can be found on GitHub.

As an example we took as input a camel picture from wikimedia and as style image Van Gogh’s famous The Starry Night. A generated image using Neural Style Transfer can be seen below. 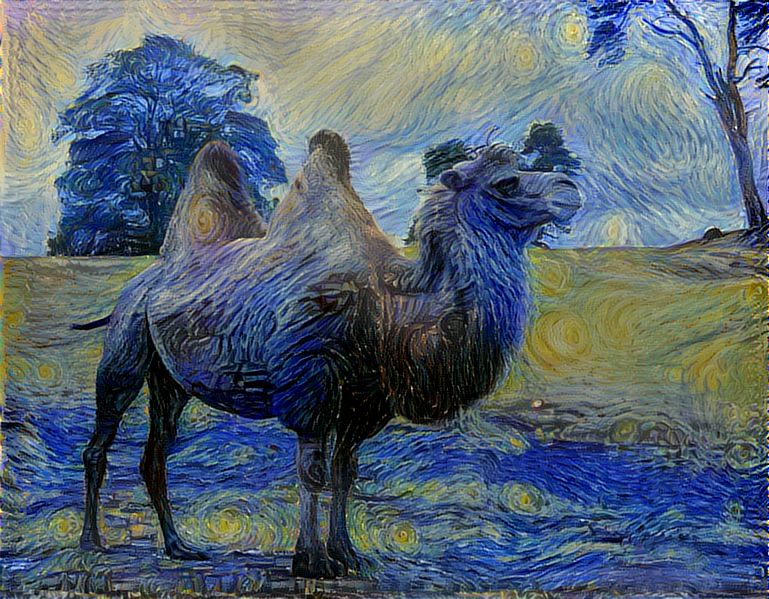 Andrej Karpathy wrote a very nice blog post on how RNNs can be used for character based language modeling. In this setting a RNN is trained to predict the next character probability distribution on some very large corpus. Once trained the RNN is given some initial empty memory and is used to randomly generates a character based on the next character probability distribution. The generated character is then given as input to the RNN as well as the updated RNN memory to generate the following character and so on.

More details are available in the original blog post and can be seen in the blog post implementation, as a fun application the author used a corpus made of all the works of Shakespeare and was able to generate samples that look very similar to some actual Shakespeare.

Once again we wrote an OCaml based implementation of the same idea, this uses two LSTM stacked on each other. The actual implementation can be found on GitHub as well as instructions on how to run it. As an example we trained a network on the concatenation of the OCaml files from the Base GitHub repo. This resulted in a corpus of 27 thousand lines. We then used the trained network to generate some random text that looks like OCaml code.

The resulting code is far from compiling but it gets a bunch of things right, like comments being properly opened and closed and containing text that looks like English.

It was fun to play with OCaml and replicate some well known results in this setting. However it should be noted that TensorFlow in OCaml has some rough edges.

That being said using OCaml has some nice properties too.

The banner at the top of this page has been generated based on this wikimedia image.